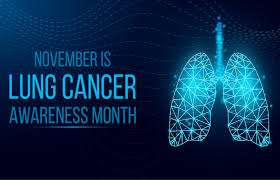 In 1995, a lung cancer awareness day was initiated to spread awareness about lung cancer among common masses. But steadily as the movement grew, the entire month of November came to be known as Lung Cancer Awareness Month.

The medical fraternity takes this as an opportunity to create awareness about the probable causes and precautionary measures concerning lung cancer.

Lung cancer is a serious matter of concern in India. India is the second largest consumer and third largest producer of tobacco in the world. Approximately 28.6% of the Indian population uses tobacco products. Unfortunately, the result is inflating tobacco-related cancers. Lung cancer is the most often diagnosed cancer and  accounts for 5.9% of all cancers.

Lung cancer does not show any symptoms in the initial stages. The effects surface only upon later stages. By that time cancer cells have already spread and the effectiveness of the treatment reduces. Hence early detection is one of foremost steps towards effective healing.

Reduce the Risk of Lung cancer

November, being the Lung Cancer Awareness Month marks the union of medical communities who join hands to support the affected and create awareness of this disease. It’s an initiative to be proactive to improve lung health. Healthy lungs ensure a healthy life.